There is a new social media campaign that was started by a transgender woman in Canada named Brae Carnes. She went into a men’s bathroom, and tweeted a photo with the caption “Plett Put Me Here.” The resulting image is jarring. Brae is clearly all woman, and she is pretty hot too. She does not look like she belongs in the dingy bathroom surrounded by urinals at all. She was referring to Senator Donald Plett who wanted to overturn some trans-inclusive human rights bills, which would mean that transgender people would not have the choice of which restroom to use.

The campaign has taken on the hashtag #wejustneedtopee. The tag was started by a transman in Minnesota, where some strict legislation is on deck that would prevent trans people from using whatever bathroom they feel most comfortable in. Michael Hughes, who is 45, took a picture of himself in a restroom surrounded by women who were doing their makeup. Michael is clearly a man, and he’s quite burly with facial hair. He definitely doesn’t look like he belongs in that bathroom! 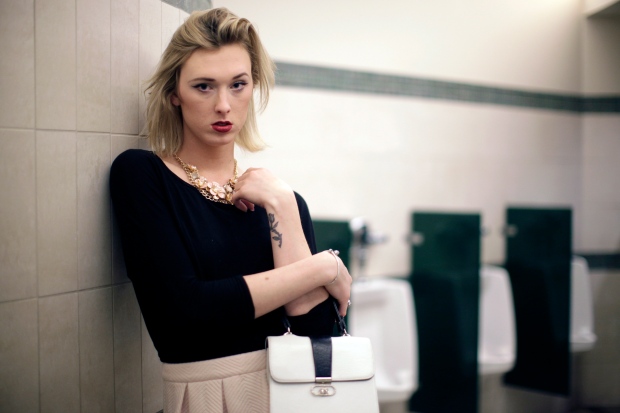 Those who oppose trans people’s choice to use the restroom of their choice are often worried about a man using a woman’s restroom, or vice versa. The irony is, that their desired legislation is creating just that situation! It is also an issue of safety. 68% of trans people report harassment when using a public restroom.

“This very visible social campaign is raising awareness about trans issues and making people see how ridiculous certain types of legislation are,” explains Georgia San Martin, a legal analyst for TSmeet.com. “Plus it brings trans people to the forefront of people’s minds, making other transgender people feel comfortable.”

Arguments For and Against Unisex Bathrooms for Transgender

Tell us what you think!